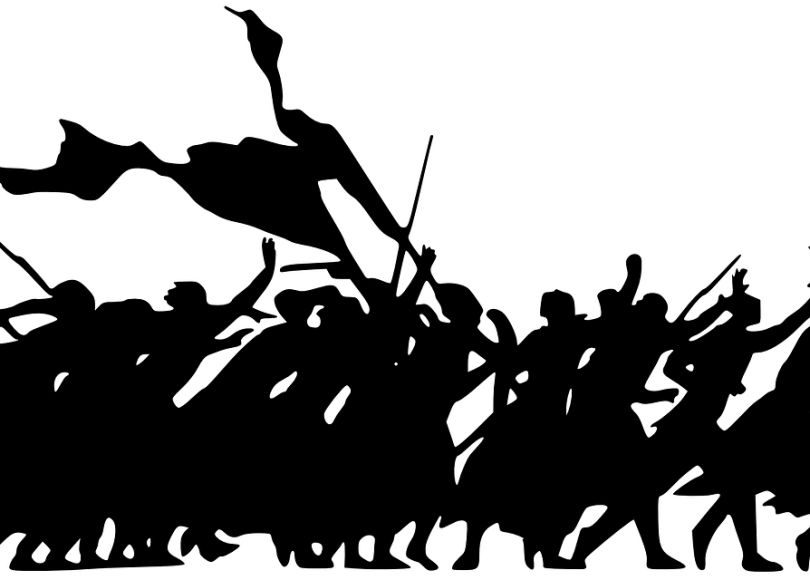 Earlier this month, millions of United States citizens celebrated independence. Blazing blasts of red, white, and blue will inevitably illuminated the night sky  as mythic tales of heroic American Rebels fighting British tyranny are once again regurgitated around the cooling embers of a once lit barbecue grill. The American public embraced with warm reminders of the ideals of liberty and justice for all. These principles, it is claimed, are the foundation of the United States civilization and are often associated with the so–called Founding Fathers and their core ethical beliefs. Furthermore, it is claimed that the United States Declaration of Independence is a material reminder of what those mythological figures who wrote and signed the document had fought for, in its proclamations of inalienable rights for all people, in its assertion that we are all born with the right to life, liberty, and the pursuit of happiness.

However, this mythology of independence for the United States is inconsistent with the material history that has been this country‘s legacy. While there are many ironies to be pointed out in a supposedly free country‘s history when it is rife with centuries of slavery, apartheid, and genocide, few so brilliantly illuminate the farce that is the United States Independence Day as the 120 year military and economic occupation of the island of Puerto Rico by the United States of America.

Since taking colonial possession of the Island of Enchantment, the United States has made it clear that it has never had any intention of releasing Puerto Rico from its rule. Still to this day are United States politicians pushing for a coerced annexation of the island, claiming that it is in the best interest of the people of Puerto Rico. Even among Puerto Ricans, it is common to hear that Puerto Ricans are not capable of sustaining the island as an independent nation.

The reality is that the United States has continually and violently held the island of Puerto Rico in its imperial grips since taking possession of it in 1898, and has smashed, relentlessly, any attempt of Puerto Ricans to control their own destinies. In his book, War Against All Puerto Ricans: Revolution and Terror in America‘s Colony, Nelson A. Denis highlights the multiple attempts of the Puerto Rican people to establish their independence from the United States, just as the American colonists had done from Britain in 1776, and the various terroristic methods the United States used in undermine these revolutionary actions. Not least among these methods are the establishment of prison labor camps throughout the island, like La Princesa. These prisons warehoused thousands of Puerto Ricans who dared to defy the United States rule on the island. Or who happened to believe in socialism. Or who happened to be in the wrong place at the wrong times.

Denis describes the frankly uninhabitable conditions of the various prisons, the imagery of which harkens back memories of Japanese internment camps, or the various Native American residential camps, or the slave cabins and slums of the antebellum South, or contemporary concentration camps along the Southern Border. With millions of files of documents recovered through spying on its own citizens in Puerto Rico, the United States government rounded up thousands of Puerto Ricans, tortured them, isolated them, threatened them, and turned them against each other, all under the guise of national security– a term that today justifies the multitudes of atrocities and lies that the United States commits against its own residents.

What threat did the independence of Puerto Rico, a 450-year old colony fighting for its own rights, have against the national security of a world military power?

How can one celebrate the independence of the United States when it has suppressed the rights of its colonial subjects, even to this day? When black and brown working class Puerto Rican women fought against the forced sterilization of their sisters (a form of genocide!), they were killed and imprisoned by the United States military, who has instructed doctors to keep the sterilization happening. When Puerto Rican sugar cane workers organized against the unjust rule of the plantation owners, the United States supported capital and funded the Insular Police Force to round up strikers and imprison them in La Princesa, never to be seen again. When young Puerto Ricans fought against forced conscription to the military that occupies the island, the American government and media labeled them terrorists and traitors.

Finally, when Puerto Ricans across all levels of society rallied for the long awaited independence of the island, as promised by the United States government in 1898, they were murdered en masse. In March of 1937, the United States massacred 19 Puerto Rican nationalists and wounded more than 200 other civilians, all of which were unarmed (apparently the second amendment does not apply to all US citizens, as no Puerto Rican civilians could own weapons.), and peacefully assembled.

In the decade following this massacre, the United States colonial government cracked down on all national independence movements on the island, arrested, tortured, and/or murdered anyone associated with these movements, and ultimately criminalized any form of Puerto Rican national identity or culture. It was even illegal, for nearly a decade, to own a Puerto Rican flag. In other words, and in the words of former governor of Puerto Rico General Blanton Winship, a war was declared on the people of Puerto Rico.

Pedro Albizu Campos, a prominent leader of the Puerto Rican Nationalist Party, was made an example of by the United States government. After the Ponce Massacre, Albizu Campos spent 10 years in prison. When he left prison, he had even more determination and passion to gain independence for the island. He became the President of the Nationalist Party and led the movement through the island, and as such became the focus of the FBI in Puerto Rico.

For as long as he could, Albizu Campos organized for revolution against the colonial rule of the United States over the island, and all along the way, there were people in his life who would ultimately betray his plans, which would culminate in his capture during the 1950 revolution attempt. Albizu Campos was imprisoned in La Princesa and spent the last years of his life being tortured, malnourished, sick, and subjected to a series of exposures to radioactive material that would ultimately result in his deformation and subsequent assassination via radiation poisoning. The United States had killed their public enemy number one in Puerto Rico, and defamed him to the Puerto Rican public as a madman and a terrorist. All of this because an island with strategic position and great resources wanted to be in control of those things for itself.

The moral of this very disturbing story of violence and oppression is that while the United States celebrates its independence, and the principles on which said independence is supposedly founded, it has spent virtually all of its history annexing and claiming territory from various indigenous and racialized communities.

If the United States is independent, why has it refused to release Puerto Rico from colonial grips? Why should Puerto Rico not have its independence when the United States celebrates its own? Denis‘ piece highlights the hypocrisy in a nation that claims to stand for life, liberty, and the pursuit of happiness can hold a colony at threat of death, imprisonment, and the denial of the most basic human dignity. More importantly, as a Puerto Rican himself, Denis‘ own experience with the conditions faced by all working class Puerto Ricans brings an insight that those of us with that background may relate to.

Vic Santos is a Puerto Rican artist, scholar, and freelance writer. They hold a bachelor‘s degree in international studies and another in anthropology. They are currently pursuing a Master‘s in Latin American and Caribbean studies, and their work focuses especially on issues of the African diaspora in the region and on the political economic situation of Puerto Rico.